Thoughts on Termination of Employees

Here is a link for the Chrome Philbert Phoenix Theme!

https://www.mychrometheme.com/t/5el8ymxm721hura7kk8c8v4f3
Posted by Anonymous at 1:10 PM No comments:

Now you can show your school spirit on your Chrome browser by installing the KIS Theme!
https://www.mychrometheme.com/t/e3qb0kmvpc96krfs13iulmvbx
Posted by Anonymous at 1:05 PM No comments:

Aysem in spring at Woomi.

Taken at Korea International School
Posted by Anonymous at 7:40 AM No comments:

Taken at Korea International School
Posted by Anonymous at 7:38 AM No comments:

I'm sitting back in the home office at Korea International School and remembering a great two days at #beyondlaptops. Before I launch into my Take-Aways from the conference, I want to sincerely thank Yokohama International School and Kim Cofino for this amazing two days of sharing with other Ed Tech people from all over the world.
The conference really focused on three big ideas for me:
I'm sure in the coming weeks I will be revisiting these ideas again and again as I process everything that was discussed and shared at #beyondlaptops. Thank you Stephen Cathers (@stephencathers), our director, for allowing Ben Summerton (@bensummerton) and I to go to YIS and contribute.
Posted by Anonymous at 1:39 PM No comments:

Over the course of the year in discussions I've had with students, teachers, and administrators I have found two Ed Tech analogies that have served me well in explaining important concepts about the nature of tech integration and using Twitter as a resource. Heading into this week's #beyondlaptops conference at Yokohama International School, I finally feel like the time has come to unveil these two analogies for the greater good of the educational world. 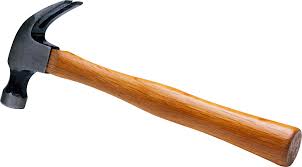 A hammer is a great tool; especially when used for jobs that lend themselves naturally to a hammer. Pounding in nails, for example, is the exact job that a hammer has been developed to do. There are other jobs that a hammer can be employed to do that work as well; removing nails from a board is another job most hammers can be used quite easily to accomplish. But, you don't use a hammer when you what to tighten a bolt into a nut. The hammer isn't designed to do this job. Tech integration is similar. Some courses and classroom environments lend themselves to using technology better and more efficiently than others; some situations simply don't. The job of a Technology Integration Specialists is to assist teachers in finding those natural integration fits and to explore new tools that could be used. The job isn't to become the ed tech hammer and slam everything in sight without first thinking if the hammer (integration) is what we really need for the job at hand.
Analogy #2: Twitter -- It's a Fire Hose

Many teachers and administrations seemed overwhelmed by the amount of information available through Twitter. They are correct about the fact the that amount of information is overwhelming -- Twitter is overwhelming. Consider this analogy, one doesn't drink water from a fire hose by pointing it at his/her face -- it will simply knock you on your butt. When drinking from a fire hose, you carefully sip from the side; even better -- you use a ladle. You dip your ladle in and sip a little and then dip again. With your ladle, you can consume water comfortably at your own leisure. Don't look into the fire hose that Twitter is and assume that you must consume all the information blasting out at you -- simply dip your ladle and sip.
Posted by Anonymous at 8:50 AM No comments:

Assigning a Desktop in Lion

If you are using Lion and are struggling with applications jumping around, try assigning the program to a desktop. Right click on the icon; go to options and you will see assign to. The screen shot should help.

Posted by Anonymous at 2:49 PM No comments:

Adolescents At School: Perspectives on Youth, Identity, and Education, edited by Michael Sadowski, is a collection of essays, research summaries, commentaries, and profiles from American secondary schools. The work introduces many faces of youth identity that exist within modern school systems. Not surprisingly, many of the identities are not the traditional Protestant, Anglo-Caucasian archetypes that have dominated most of US history, literature and thought; instead, these identities and voices are African-American, Chicano, Immigrant, Asian, Homosexual, Underprivileged, and countless others who have found themselves outside of the traditional American identity. Sadowski’s collection asks educators to consider other possible identities as not only acceptable and normal, but more common and real than the traditional US identity.
Micheal Nakkula, one of the contributing authors of the collection, suggests the idea of creating possibility by opening the door to allowing students to explore other options and futures. All adolescents need opportunities to develop their passions and skills in activities that allow them to invest personal energy in a positive way that will provide alternatives for their future. Educators can help students flourish through helping nurture their passions and skills. Through directing students toward positive role models within the community and by being positive role models themselves, educators can help more students realize their full potential and prevent adolescents from falling victim to stereotypical problems. By building real, genuine relationships with adolescents, educators can provide alternatives to the limited possibilities that adolescents may see before them in their community (Sadowski, 2010).
After working in education for 15 years in places like rural Montana and Alaska and urban areas like Seoul, Korea, these alternative identities speak to me directly. These are the voices who have cried for attention and nurturing throughout my career -- Native American, Native Alaskan, Underprivileged, Homosexual, Special Needs, and Asian. Sadowski’s collection has reaffirmed my belief as a professional that every child deserves acceptance and love while receiving the best education possible. Students do not need our sympathy; they need our respect. They do not need our judgment; they need our trust. When we make real relationships with students, they flourish; when we simply show up and do our jobs, they flounder. Our job as educators is to look at each child and say, “You are unique and a valuable individual. How can I help you reach your dreams?” To do anything less is unethical, immoral, and criminal.

Posted by Anonymous at 11:50 AM No comments:

<script type="text/javascript" src="http://groups.diigo.com/widget_mana/group_widget?group_name=asia-ed-tech" ></script><noscript>Diigo Groups</noscript> I'm hoping that this group will come to life at the #beyondlaptops mini-conference in Yokohama on April 19-20. If you are an educational technology person in Asia, I encourage you to join and share.
Posted by Anonymous at 12:55 PM No comments:

First, I want to apologize to my friend Wolf Lindell (@barleywolf) for this extremely long overdue blog post about beer. Wolf was good enough to take a blog challenge back in the fall about his journey to work; after documenting his daily adventure, he challenged me to write a post about beer... Months passed and I never got around to it and then just when I was thinking about doing the post, I started brewing my own beer. There is a group of gents from KIS who live in my apartment complex and all brew, so I joined in on the experimenting. In my mind I thought, why write about a beer I purchased at a store, when I could wait a little longer and write about my own beer. Which brings us to today, my first attempt at beer is ready to drink! The photos are proof that the experiment worked, but what about the taste? The pilsner is a little darker than I expected; it has the reddish tint of an amber rather than the pilsner; but, I admit a fair amount of ignorance about Czech Pilsners, so perhaps this is normal. I bottled my beer in 1.5L bottles and the recipe was for 1L bottles, so I naturally added more sugar than was called for, but it must have been a bit of an overkill, because when I opened the first bottle -- foam came rolling out of it. And, it continued to foam for quite some time; and, the foam failed to stop -- I finally tipped the bottle and poured Aysem (@Aysem_bray) and myself a glass each. The beer isn't clear, but there is no visible sentiments or impurities to be seen either. The aroma is heavy with hops and malt. The taste is between an amber and pilsner, with the clean after taste of the amber and the simple fore taste of a pilsner; plus, the beer is wonderfully bubbly. Delightful! It has been worth the month long wait to taste it. Hopefully Wolf will think this blog post is worth the six month he has been waiting. The Woomi Squirrel Brewery has produced another successful beer and another brewer has been born. I will put my beer to the test on Cinco de Mayo, when the brewers and their supporters will have a BBQ and taste test in the park behind the Woomi Apartment complex. It should be a fun afternoon with colleagues and friends. Today JP picked up the fermenter and is planning to begin his first batch as well. Thanks to Ben (@bensummerton), Lloyd, Jeff, and Kevin for the encouragement. It is time for you guys to taste the latest brew.

See the full gallery on Posterous
Posted by Anonymous at 4:04 PM No comments: