First, I want to give another shout out to @maplesyrupedu for creating the concept of #pubpd. It really is simply brilliant. Second, I want to give another shout out to @clos_gm for bringing the idea to #Asia with #pubpdasia. And Third, I want to give a shout out to all the educators all over Asia who jumped on this idea and arranged multiple locations where live f2f events happened while the Twitter chat was running. I think we are on to something here and it has the potential to be huge. The next #pubpdasia will be happening in January and the amazing duo of @mcelroy23 and @cho_liz are going to be the moderators.

Reflection on #pubpdasia:
The best part of this event was the combination of a live Twitter chat and face-to-face discussions. In Cheongna we had six participants, which was actually five more than I thought I'd have. Things are really busy at school these days and not many folks are really in to Twitter, but that was part of the magic. Two of our directors showed up, this I did not foresee at all, but it was great. One has been trying Twitter and the other one said, "I haven't touched my account in a month and probably won't again until the next time." One of our English teachers showed up, and at one point he asked me to tweet something for him, because he isn't really interested in Twitter either. Do you see what was happening? People who saw no purpose for Twitter were suddenly seeing a use for it. And people who probably will not get in to Twitter were still part of the discussion. This is a perfect synergy. And that, my friends, is my big takeaway from this event. We need to be doing more activities like this in the future, tying f2f social gatherings with social media events.  We were discussing ideas that came up from the questions asked during the chat, but being able to think about our own context and things that would work at Cheongna Dalton School. I'm hoping to get more people out in January, but even if I don't find more people to join -- I am sold on this idea.
Posted by TS Bray at 12:24 PM No comments:

#PubPD is coming to Asia! 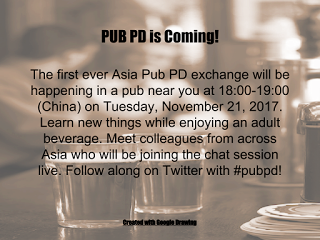 Carlos Galvez (@clos_gm) is starting an incredible professional development opportunity for Asia and it is starting at 18:00-19:00 on Tuesday, November 21, 2017. The idea is simple -- go to a pub, order an adult beverage of your choice, and get on Twitter. That's it! Amazing educators from around Asia will be joining the chat with the hash tag: #pubpd. For those of us in Korea, there are currently two pubs that I'm aware of involved in the action -- Cocky Pub in Yatap and Hans Craft Brew in Cheongna. Come out and join! If you can't make it out of your house, at least have a drink and follow the chat on Twitter. #PubPD was originally the brainchild of @maplesyrupedu from Canada. Like... Those Canadians are pretty cool, eh? Totally not a bunch of knobs or hosers like those folks from the US.
Posted by TS Bray at 11:34 AM No comments: 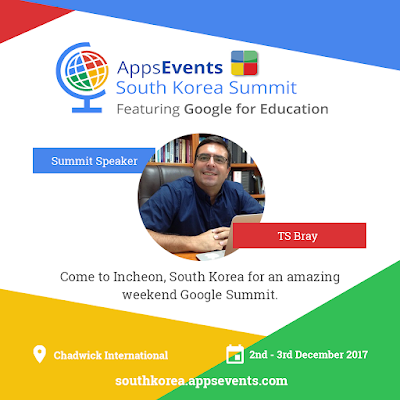 Creating an Email Filter in Gmail


One of the great things about Gmail is also one of its worst features if you don't know about it. Gmail has predictability through Artificial Intelligence. This is just a fancy way of saying that over time, your gmail account begins to learn about your email trends. If you receive loads of email from a person and you rarely open those emails, Gmail starts to think that those emails are spam and puts them in the spam folder automatically. Within our domain, Claudia sends a lot of important emails to everyone, so her account is already flagged as "troublesome." Claudia is simply doing her job and Gmail is simply doing its job, but if you haven't read some of Claudia's emails -- they could be going to your spam folder. This video will show you how to avoid that problem by creating an email filter.
Posted by TS Bray at 8:44 AM No comments: