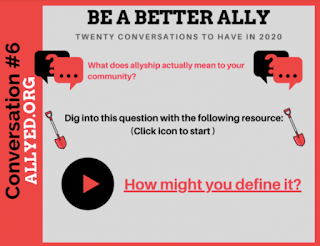 
I try. I really do try. But I'm going to be honest, it isn't easy work. In one of my other posts, I explained my background and it makes my work difficult, because I have huge blindspots. But with that said, it surely is easier for me to do this work than it is for my friends, students, and parents who come from diverse backgrounds to live their lives. Yes, the discomfort I feel wrestling with these uncomfortable topics and ideas is FAR, FAR, FAR easier than it is for them to simply live day-to-day. And because of that fact, I am willing to question everything about my assumptions and how I came to those assumptions. I'm willing to question my friendships, the media I consume, and the habits I have developed over time. It is not the easy thing to do, but it is the human thing to do.

Realistically I think this has become more difficult in the current political climate, but again -- I try. I try to simply listen when a person is telling me about their feelings and how they are struggling with a certain situation. I'm working on not doing the "well welcome to (blank)" approach to being supportive.
Yes, I'm willing to make a life-long commitment, but like anyone -- I will have days when I'm much better at it than other days.
Yes, I will and as a display of this I would like to share a story about a girl named Crystal. When I was doing my student teaching at St. Ignatius School in St. Ignatius, Montana, I met a young woman named Crystal. Crystal was a struggling Native American girl of 14 in 8th grade. Her attendance wasn't great and her performance in class wasn't really impressive either, but she came to school at least four times a week and did do work. She hadn't given up; she was still making an effort. And then one day, Crystal was just gone. No one seemed too surprised by it. Crystal had moved around to different schools on the reservation before. As a young teacher, I was disappointed by Crystal no longer coming to school. Although she wasn't a fantastic student, she was a nice person and she had friends.

One day I was scheduled to mirror the principal; I was curious about how his day was compared to a classroom teacher. At one point in the afternoon, a family came to school with a new student who would be starting school on Monday. This boy needed a locker, so the principal went to clean out Crystal's locker. Inside the locker were her school books, her notebooks, a hoodie, and sadly an empty beer bottle. At that point I finally asked the question that had been on my mind, "What happened to Crystal?" The principal told me that Crystal's grandmother said she ran away. And that was it. Period. End of story.

And for 23 years, I've been wondering what happened to Crystal; at least once or twice a year she crosses my mind. She ran away, but did she? What exactly did her grandmother say? Did Crystal leave a note? Did she call? Was the grandmother encouraged to inform the police? Were the police ever informed? Why didn't I ask these questions? Why didn't I push the matter? In the last few years, the caucasian community has finally become aware that Native American women and girls have been disappearing at alarming rates, but that has only been discovered because Natives have been posting all the disappearances on social media. What about before social media? How many Native American women and girls have gone missing before the rise of social media? Was Crystal one of them?

I was a young, male, caucasian educator doing my student teaching at a school on the reservation, it wasn't my place to rock the boat. It wasn't my place to ask the questions that someone should have been asking. Questions that anyone could have been asking, but nobody did. That "nobody" includes me. I hope that Crystal is alive and well; I hope that she is living happily somewhere surrounded by loving family and friends. I hope.
Posted by TS Bray at 10:33 AM No comments: 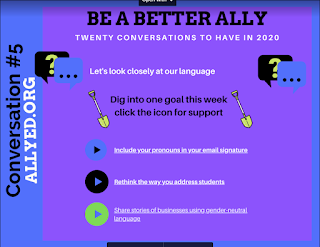 I have to admit to a huge blind spot on this issue that I have gotten better about but still find myself struggling with. It isn't the concept I have a problem with, it's the practice of it. I totally get why we should use more gender neutral pronouns, but I have habits that have been formed by 48 years of life that don't easily change overnight. Not using that as an excuse, just stating a simple fact about my life. I've moved a long way toward improvement, because I used to address the entire class as "guys". Ugh! I know, I know, I know... But when I was studying Spanish, it really made me think about that blind spot; because in Spanish, if there is one male person present in a room full of many non-male people, the gender of the pronoun used automatically switches to male... That really got me thinking. So I worked hard to say "guys and gals"; still not great, but much better. Lately I have been

working on being sensitive to gender neutral pronouns in my professional and personal life. I'm getting better at asking people upfront what gender pronouns they would like to have used about them. I was listening to Just Between Us (one of my favorite podcasts) and Gaby Dunn's partner was a guest on the show. Mal Blum is a non-binary musician who uses they, them, their as their personal pronouns. It was really interesting to hear how the hosts were making sure to use the correct pronouns with Mal throughout the show. The simple guide that Tricia shared in this challenge conversation is a excellent and simple tool for reminding yourself to use more gender neutral language with your students, colleagues, and parents. Currently I'm the Director of EdTech at my school, but next year my role will change to be the Director of Professional Learning. In that role, I plan to introduce the idea of gender neutral language to the faculty and I already know there will be some people who really push back on it, but the majority of our faculty will completely understand it and be on board; some members are already aware and sensitive to gender neutral language, so a core group of allies exists to build from at school.
Posted by TS Bray at 8:22 AM No comments:

Conversation #4: Can you define privilege? Can you explain heterosexual privilege?


Provoke a Dialogue about Straight Privilege

I'm not going to make any friends with this post, I can tell already. But I have recently been reading The Seven Necessary Sins for Women and Girls with the #edurobookgroup and I'm not sure if making friends is a goal for me anymore. A quick shout out to Tricia Friedman (@FriedEnglish101) for organizing and facilitating the book group. Thank you!

So in short, yes and yes... But I want to start by defining what underprivileged is to me. The video of the coin analogy does a good job of explaining the concept of privileged and underprivileged, but it does really drive into the damage the is done. In ancient China, there was a form of execution called Death by a Thousand Cuts. In and of itself, each cut wasn't deadly because the cuts were shallow; each cut caused pain, but not death; however, the totality of the thousand cuts caused death. A slow, lingering, painful death. Being underprivileged is like being executed by the Death by a Thousand Cuts.

I was lucky to be born a white, heterosexual male in the US. I am the definition of privilege; however, with that said, I am also from a rural community in a state that I have often referred to as part of the Third World of America. The Third World of America, as I define it, is comprised of the large rural areas in many western states. They communities have few economic opportunities and are mostly comprised of working class people. The term Third World as gone out of vogue in the current political climate for understandable reasons. The term stigmatizes Developing Nations and carries a load of stereotypes, which is exactly the reason why I insist on using it.

I grew up around blue collar ranching, farming, and logging families. Bigfork, the town I'm from originally, is a small community on the north end of Flathead Lake; the south end of the lake is in the Salish & Kootenia Reservation. Because the people I grew up around were hardworking people, who struggle to survive in an economy that is well below the national average, conversations about privilege are frowned upon. Speaking of privilege stinks of elitist jargon to many from my state. When my friends back home think of privilege, they think only of wealth, not of race, ethnicity, or sexual orientation. In their day-to-day lives, they really don't see it. And to be honest, I really didn't either growing up. I knew that many of Native friends struggled even harder than most of the white people around me, but there were "reasons" for those struggles. And the few openly gay people who did exist in my town were "tolerated." It really wasn't until I moved to Korea that I started to understand privilege and how it really plays out in regular daily life. If you have never lived in a community where you are a visible minority, I highly recommend it, because it will teach you things. Uncomfortable things; painful things; true things.

So let's move on to heterosexual privilege, because whether you want to believe it or not -- it is a thing. Please check out the slideshow and read each slide carefully and really stop and think about each one. As a traveler, the slide about not having to be afraid if my life style will be accepted when I travel was the one that really gets to me. I cannot imagine (I have not had to imagine) feeling worried if my sexuality was going to be a problem when I travel. Let that really sink in for a minute. That is the Death by a Thousand Cuts you are feeling, my friend.
Posted by TS Bray at 9:27 AM No comments: