Conversation #3: How are you bringing people together to talk about allyship and see it as a critical component of your community?

Although I think my school community has came a long way in terms of building allyship, I believe there is still a lot of work to be done. We do have teachers and students who identify as members of the LGBTQ community, but I'm don't feel like we are at the level that Vica Steel talked about in her interview on the Be a Better Ally Podcast, "A welcoming school doesn't wait for the transgender person to say 'Hey we need lessons on gender identity.' A welcoming school is already doing those lessons." That feels like a level that we are still striving to obtain to me. There is forward progress and I want to celebrate that, but I don't want the community to feel like, "Hey, we have done enough now." We have worked a lot on being good friends and empathy in the First Program and Middle School House programs as well as understanding why bullying is wrong. The High School House program has worked on tolerance and empathy, but specifically teaching lessons that are about gender identity, isn't being done. There is a line that teachers and administrators feel they shouldn't cross with our students and parents. Korea is a very conservative society, but most of our families have lived aboard; and yet, the feeling continues to be, "let's not teach that directly." It makes me wonder if we aren't doing the lessons because of our sympathy to our families traditional views, or are we not having those lessons because it is easier for us to not do them for ourselves. I feel like this is an area where we should continue to grow. We are heading into an accreditation cycle with WASC, so possibly it is time to ask these questions within our community as part of our self-study. I'm the person is charge of facilitating the accreditation process, so I have the ability to move the ball toward the goal posts.
Posted by TS Bray at 2:43 PM No comments: 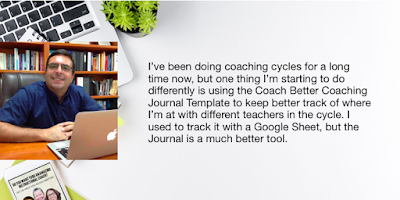 Coaching Resolution Challenge #2 was to do a coaching cycle; I sort of been there and done that quite a bit, so I opted to adjust my coaching cycle with the adoption of the Coaching Journal Template from Eduro Learning. It is a great tool for managing and reflecting on how your coaching is going with multiple educators. I highly recommend it.
Posted by TS Bray at 11:25 AM No comments:

One assumption we definitely make is that handling a bullying problem is easy for a kid, it isn't.  In fact, it isn't easy for adults. Growing up I was on both ends of the bullying situation and it is not easy to handle. I remember not wanting to go to school, because I knew that the whole day would be filled with torment. Being a witness to bullying isn't easy either, especially if you have been bullied yourself. You feel bad for the person being bullied, but relieved that it isn't you. There are feelings of guilt and shame because you know you should help the person being bullied, but you don't want draw attention to yourself and become the direct victim again. To this day I still feel guilt for not helping one of my friends when he was being bullied in fourth grade. I'm 48 years old and this is still harming me. Thinking that dealing with bullying is easy is a horrible assumption and believing that bullying doesn't cause long-term trauma is another terrible assumption.

And what is the danger in making these assumptions? Kids get hurt -- that is the danger. The insidious pain of damage that can't necessarily be seen, but most definitely is felt. Lingering shame and guilt. Horrible self loathing. I can still remember thinking that being dead would be much better than going to school each day and dealing with the bullying. And when I wasn't the direct target, I was happy for me, but sad for the other people being tortured. I had empathy for their suffering, but not enough to stand up against the bullies and take the risk of being the target again. The guilt caused by being a bystander is something I still feel. The danger is real; the damage is real.
Posted by TS Bray at 8:34 AM No comments:

Conversation #1: When do we let our own personal biases or our own experiences with heterosexism hold us back from engaging in conversations about LGBTQ+ issues?

I have worked in private, international schools for the vast majority of my career. It is a system, where at the end of the day, there is a customer. I've never been told outright -- "Don't talk about that because it makes the parents who pay us uncomfortable," but there have been plenty of times where it was clear to me that was the subtle message. So when does heterosexism get in the way of me engaging in deeper conversations about LGBTQ+ issues? I have to sadly admit that -- it is always.

I wish it wasn't true, but it is true and to deny it would be a lie. I often worry in the back of my mind, will I get fired for this? Private schools don't have unions and our contracts usually have clauses that make it pretty easy to dismiss us for any reason the school sees fit. And even if you aren't dismissed in the middle of the year, the school doesn't have to offer another contract. They don't need to supply a reason why. That power isn't often abused, but "often" isn't never. I feel like I've been very lucky and worked in schools where the Board and/or administrations were trying to make things better for everyone.

I've worked with teachers who were openly gay and they were supported (sometimes due to pressure from other teachers and community members). I've had students who were openly gay and they were supported (although to say they were completely accepted by everyone or that it was an easy life for them would be untrue). I don't always stay silent; I have had moments where I defended someone or discussed why being LGBTQ+ shouldn't be judged... But have I done it often enough? Have I really pushed back whenever I saw injustice? I feel sad to admit that I have avoided discussions because I knew it would be a safer option for my career, but I have done it. I'm a product of social pressure, but that doesn't justify my silence.

So what now? Where do I go from here? How can I be a better ally? Resolutions are often so hollow and shallow and dry up and blow away like fall leaves in the coming winter. Committing to support my friends who are LGBTQ+ is easy, but how do I support people who are LGBTQ+ in general? How do I step outside the comfort zone of heterosexual security and push not only when it is easy or convenient, but every time, everywhere? I need to step up and take the advice I gave a colleague long ago, "If that is the reason you get fired, do you really want to work with those people?" The answer is within me, I just need to stop being scared of "what if" and do the right thing.
Posted by TS Bray at 11:01 AM No comments: 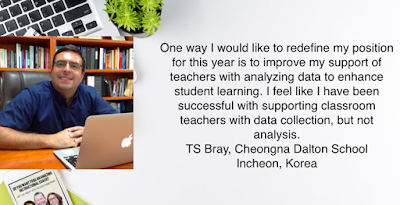 My friends at Eduro Learning are doing a 10 Coaching Resolution Challenge to kick off the new year. I'm a little on the crazy, busy side right now, but everyone always is, so I refuse to use that as an excuse. I also want to help them spread the word and model best practice to their educators studying for the Coaching Micro-credential. The first challenge was about defining your role as a coach. I decided a more fitting choice for me would be to focus on redefining a certain aspect of my role. I have often supported fellow educators with thinking up creative ways to collect data, but rarely get involved in supporting them with analyzing the data. As we all know, gathering data is all well and good; but, if nothing is actually done with the data -- what was the point? I want to work more with educators to ask the questions that come after data is collected.
Things like:

Cell Phones in the Classroom 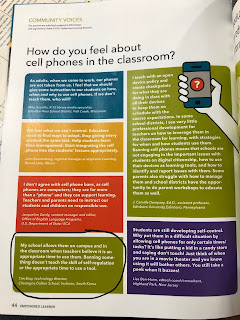 The year started off with a great personal success for me -- I was quoted in the January issue of Empowered Learner. Of course, I support the use of devices in the classroom when it is appropriate. My feeling is that we should be teaching our students how and when to use technology. If we only ban the device, we only make it more alluring and fail to teach appropriate use and self-regulation. The devices aren't going away; they will have them in college and in the work place. If the student was doodling on a notebook with a pen, would you ban the notebook and the pen? No! Why not help them learn to use it effectively and efficiently? Isn't it our job to help them learn? 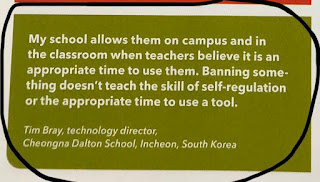