Book me for a Google Hangout if you need support or want to brainstorm/trouble-shoot.
Blogger recently went through a subtle update, these Slide reflect the changes to the User Interface (UI).

The Basics of the New Google Sites in 10 Slides

A long time ago in a galaxy far, far away I wrote a post about how to place a Twitter Feed on your Blogger. OK, it wasn't that long ago -- it was 2013 and it wasn't in a galaxy far, far away, because it happened here on planet earth, but it seemed like a nice way to introduce my updated version of putting a Twitter feed on your Blogger. The original post has 43K+ views and 294 comments to date. It has been by far the most important blog post I have ever written traffic-wise. And then it happened, two weeks ago, someone made a rather snarky comment on the post.

I'm not sure why Patricia Heil thinks that I should continue updating a blog post from over three years ago, but she does and after I though about it, I decided she was correct. It is time for an update to the original post. So for all you users of Twitter and Blogger, here is the updated version of How to put a Twitter Feed on your Blogger. Enjoy! 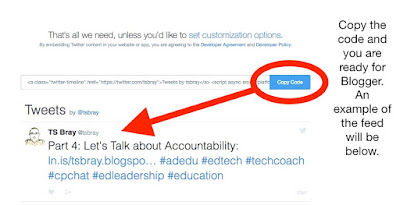 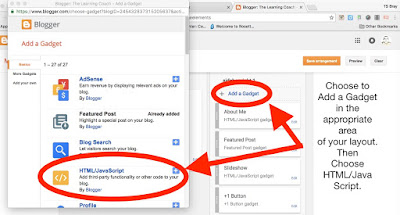 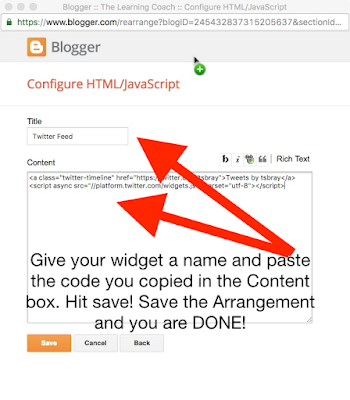 You must realize from the beginning that just because something comes easy to you doesn't mean it comes easy to others. Because of this fact, you should never make someone feel inferior because they learn slower or because they are interested in different things. We have a tendency to be incredibly patient with students, but not patient with colleagues. If you want to be an effective support person, you will need to avoid the professional blind spot and tame your tongue.

I remember when I first started in EdTech, I was humble because I didn't have a computer science degree. I was working in someone else's field in a sense. The most negative interactions I had as an EdTech person have generally been with computer science people, but not CS teachers -- with IT Admin. I don't want to paint all IT Admin the same way, because I have meet and worked with some amazing IT people. But there are some folks in IT, as there are in any subject, who seem to want to look down on others. Nothing will kill a program faster than people feeling pushed away by negative attitudes and experiences. I've had teachers tell me that they didn't want work with Mr./Ms. X because of his/her attitude/sarcasm/negativity. You need to respect people and appreciate their abilities, even if those abilities are low by your standards. You are building capacity; not everyone has it when you start with them.

Me: Hi! I'm Tim from ____ school and I noticed Twitter is blocked. (in a pleasant and unassuming tone)
IT Guy: Yes, it is. (short and curt)
Me: Would it be possible to unblock it? (still being pleasant)
IT Guy: Why? (now snotty)
Me: I'd like to tweet about the conference. (continuing to be pleasant, but struggling)
IT Guy: Tweet about the conference? (sarcasm and some eye rolling)
Me: Yes. I like to share my learning with my PLN. (more forceful now)
IT Guy: I'll look into it. Give me a few minutes. (sort of a strange look on his face; I think he realized that he was out numbered in the room or something)

It was like I fell into an episode of the IT Crowd. Surreal and bizarre. I realized later that I was a threat to his little kingdom. He was the authority on computers and Internet at his school and was very used to having others simply go along with his decisions and rules, so someone questioning that was a challenge and a threat to the status quo, which he usually crushed with sarcasm and rudeness. When it didn't work, he wasn't sure what to do. Within five minutes, I was on Twitter and Edmodo. To this guy's credit, by the end of the two day conference, he seemed like a changed person. I think the openness of other educators and fresh ideas expanded his mind. He was asking our team about social media that we allowed (everything) and how teachers were using it. He learned that he had things he could learn from us and that is the secret to avoiding the professional blind spot. Remember that other people may not have the level of skill that you have in a certain discipline, but they may have great ideas about the field anyway. When you are helping someone build capacity, keep your ears open and you may find that you learn something surprising and new. At the very least, you will learn more patience and that is something valuable.
Posted by TS Bray at 9:04 AM No comments: